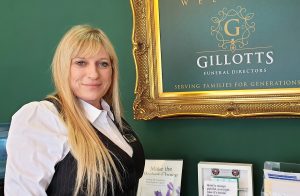 She has worked for Gillotts Funeral Directors for a year and now Jodie Wardle has taken on a new challenge, by returning to the town she grew up in.

Jodie says she is finding her new role “massively rewarding” after she recently joined the team at our Kimberley branch.
She was born in the town and went to school just around the corner from our office, in Main Street, where, working alongside funeral director Alan Winfield, she is responsible for talking to families and organising their loved one’s send-off.
Jodie previously divided her time between working as a charity donation administrator at our headquarters in Eastwood, and working as a funeral arranger at our Stapleford office.

Jodie joined us last year, having previously worked in administration roles for the NHS and the British Army military police, and said she is thoroughly enjoying her new role.
She said: “I was born in Kimberley and I grew up here, so to come back here and work in a town I know so well is a great opportunity for me.
“My family actually came into this office and spoke to Alan when we organised my dad’s funeral three years ago and at that time I remember thinking what an interesting profession it would be.
“Now I’m working here myself I’m finding it massively rewarding, especially because I’m dealing with families of people I either know or have known of from growing up here.

“I know how important that local connection is to anybody who has just lost a loved one.”
Joanne Hutsby, a partner in Gillotts, said’: “All of our offices serve tight-knit communities and having somebody like Jodie, who grew up in Kimberley, is a real comfort to local families.
“Over the past year Jodie has shown that she has a real interest in helping people and high levels of empathy, which are vital in this industry.

“We are really pleased that she has taken to her new role so successfully.”