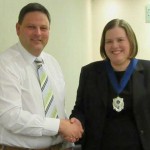 Joanne has been elected President of the Nottingham and Derby District Funeral Directors’ Association, becoming only the second woman to hold the office. Joanne is following in the footsteps of her father Barry and also of funeral director Alan Winfield, who have both held the office.

In the photograph, Joanne receives the Chain of Office from Immediate Past President John Caney.