We’re delighted to announce that we will soon be able to host services in our own purpose-built chapel for the first time, thanks to an ambitious £350,000 renovation scheme on a former local police station.

The plans will involve creating a 20-seat chapel, alongside a number of other new facilities on the ground floor of Eastwood Police Station, which was built in 1878 and is right next door to our Eastwood branch.

The police station has stood empty for four years but we bought it in 2018, and have recently been granted permission by Broxtowe Borough Council to carry out a conversion which will ensure the building continues to perform a community function. 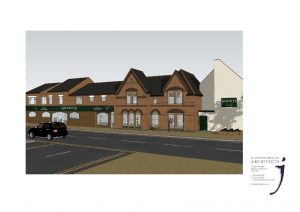 Giving families space for their ceremonies

The chapel is one of three chapels of rest and will be large enough to hold intimate funeral ceremonies when only a small number of attendees are expected. There will also be facilities for families to prepare their loved ones for burial or cremation themselves, which is an important requirement of certain faiths.

An existing vehicle entrance between our current premises and the police station will be filled in and converted into a reception area, and the existing funeral home will be renovated to include two family rooms and more office space.

The expansion of the Eastwood site is also necessary because of its role as the headquarters for the wider Gillott’s group, supporting our other funeral homes in Kimberley, Selston, Heanor and Stapleford. Clients from any of its funeral homes will be able to make use of the new facilities.

Plan is three years in the making

Joanne Hutsby, a partner in Gillotts, says that the police station conversion is three years in the making and will follow other ambitious schemes to convert community buildings that we have undertaken.

This includes a successful £300,000 renovation of the ground floor of the former United Methodist Free Church chapel in Main Street, Kimberley, which was turned into a funeral home six years ago, and the conversion of Selston’s former police station five years ago.

Joanne said: “Eastwood Police station is a part of the history of the town and so we’re really pleased to be able to announce plans which will ensure that it will soon have a role in the lives of the community again.

“Changing trends and the lockdown has meant that many families prefer to have smaller, intimate funeral gatherings and our plans for a larger multi-purpose chapel will give them somewhere they can hold a service before their loved one is taken to be buried or cremated.

“It’s a first for Gillotts, but it’s another sign of how we are adding new facilities to keep up with what families are looking for when they set about planning their loved ones’ funerals.”

The police station, which has a more modern extension stretching around the corner into Oxford Street, was replaced in 2018 by a new station co-located with Eastwood Town Council just 150 yards away, on the site of the former Post Office.

Why duty always calls for Gillotts over Christmas?