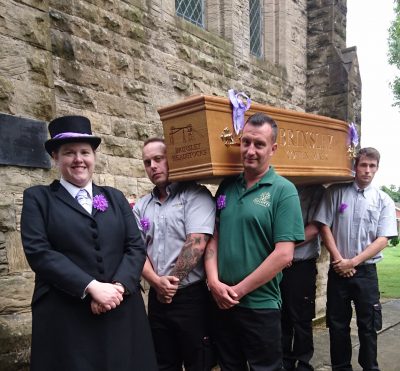 After an unsettled week, the weather was kind to us for the 2017 Brinsley Coffin Walk, and the sun shone all the way.

The walk recreates the journey that families in Brinsley had to take to bury their loved ones before Brinsley got its own Church and Churchyard in 1861. Until then, the closest burial ground was at Greasley, so coffins were carried the 3 mile journey across the fields, with special ‘Coffin Stones’ placed at intervals along the route where the families would rest and maybe raise a glass to the deceased on their final journey.

This is the 12th year of the coffin walk, and the 3rd year that it has taken place with a full-size coffin. Originally, a small replica coffin was made by local historian Stan Smith, who found out about the coffin walks during his research into the history of Brinsley. However in 2015, Stan met up with Steve Soult, managing director of coffin manufacturers Steve Soult Ltd, who had recently moved to Brinsley, and the idea of using a full size coffin was born, with willing volunteers from Steve’s factory carrying the coffin, with Joanne leading the way dressed in traditional funeral attire.

This year, the coffin was carried by a team consisting of staff from both Steve’s factory and Paul from Gillotts, and once again was led by Joanne. To bring this ancient tradition into the modern era, this year we added a colour theme with lilac accents, something that many families do today to add a personal touch to their loved one’s special day. 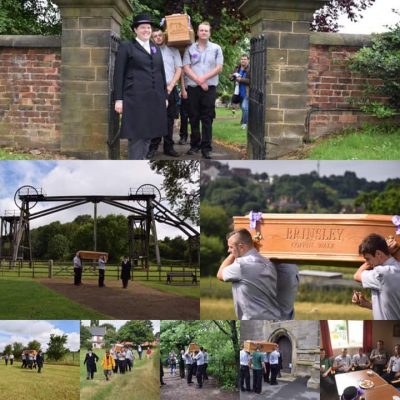